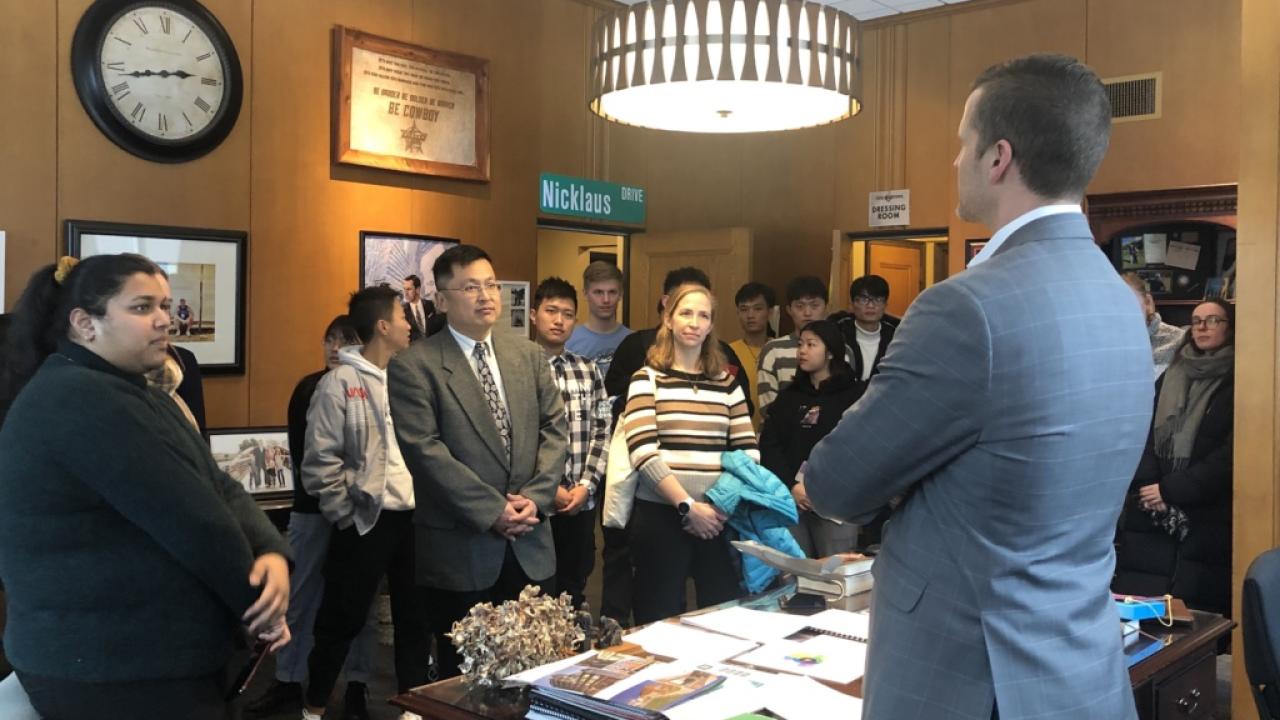 Augustana University’s Executive Vice President and Provost said he recently had the best 30 minutes of his teaching career, which is saying a lot considering it has spanned more than two decades.

Irvine says it came after 11 students from Guangxi University in Liuzhou, China, and 12 students from St. Paul Gymnas in Bergen, Norway, came together on Augustana’s campus to study American culture and experience an American campus community environment.

“Diversity is something we talk about and something we hope for and it’s something we plan for; but it’s not something that will just happen, especially at an institution like this. You have to take a lot of steps,” said Irvine.

Through contacts he made at his previous institution and a lot of hard work from the International Programs Office (IPO)  at Augustana, Irvine was able to bring a shortened study abroad program to Augustana during its four-week January interim — also known as J-Term.

The Norwegian and Chinese students received more than just a university experience while in the United States. Irvine and the IPO team worked diligently to connect their four-credit class on American mythologies to lessons you can only get outside the classroom.

18-year-old Anna Elisabeth Øyrehagen Akselvoll of Vaksdal, Norway, said, “I think it’s really important to travel a lot and see the rest of the world as a part of your life because we all need to cooperate to face all the differences and the difficulties that the world is facing in the future.”

To complement some of Irvine’s lessons, the students met with business leaders and organizations throughout the community. The Norwegian students, who are more interested in topics related to the liberal arts, visited places like Boadwine Farms and Lutheran Social Services. More focused on technology, the Chinese students took tours of POET, EROS and Sanford Imagenetics. Both groups also heard from several current and former local politicians.

Sioux Falls Mayor Paul TenHaken talked with the students for an hour and answered questions about the city, his background and his vision. Once an international student himself, the former website developer says he’s a huge advocate of overseas study programs. He says his trip to Holland in college was incredibly meaningful and opened his world view.

“We continue to become a more diverse city. Programs like Augie, that are bringing in students from around the world to Augie’s campus and also sending them out, are very important to helping advance that goal,” said TenHaken.

Irvine says to reach that goal, diversity has to be intentional. By building long-term relationships, Augustana hopes to have them become true exchange students or even degree-seeking students.

“We know they’re some of the very best by virtue of the fact that they would spend literally 60 hours to get here. That kind of initiative is the kind of people we ultimately want to have end up here,” said Irvine. “This is a group of people we want at Augie, obviously. It’s also a group of people I would love to have in Sioux Falls.”

While this is the first year the program has come to fruition, it won’t be the last. Augustana already has 23 more students signed up to visit next January. That number could be up to 50 in 2022.