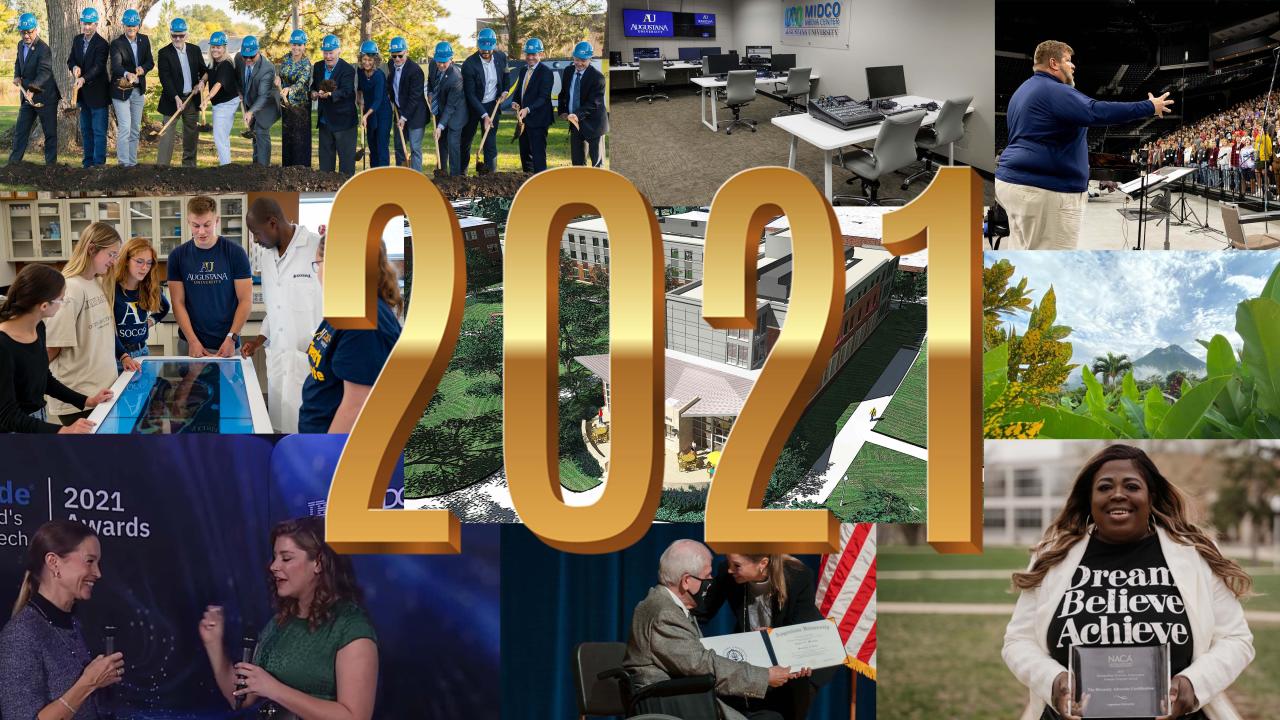 As 2021 comes to a close, we look back at the top stories from Augustana University over the last year.

Augustana announced that Midco committed $1.35 million to enhancing its long-standing strategic partnership with the university, investing in Viking Bold: The Journey to 2030.

Despite the ongoing pandemic, an Outcomes Report by Augustana showed that 97 percent of 2020 graduates found employment in their major or chosen field.

Augustana announced a $500,000 gift from Eric and Danae (Smith) Delman ‘77 of Alexandria, Virginia, designated to benefit the Augie Access Program within the Sharon Lust School of Education.

For the first time in its 161-year history, Augustana announced that the university’s endowment fund surpassed $100 million.

Augustana announced that Elizabeth Kiffmeyer ‘22, of Woodbury, Minnesota, was named a 2021 Goldwater Scholar by the Barry Goldwater Scholarship & Excellence in Education Foundation via a press release on Mar. 26.

Five Augustana students received a 2021 Covenant Award in a virtual ceremony held on May 7 — lifting up those who exemplify the university’s core values: Christian, Liberal Arts, Excellence, Community and Service.

Augustana announced a $50 million housing plan focused on new and enhanced facilities that will serve the educational, spiritual and holistic needs of its students and staff, as well as inspire others in the community who utilize its campus.

Augustana's nursing program has increased its NCLEX pass rate by 4% since 2018, positioning the university at the top of South Dakota’s Bachelor of Science in nursing programs.

Augustana’s School of Music (SoM) announced that it is the proud artistic partner of the largest arts organization in the state — the South Dakota Symphony Orchestra (SDSO).

Augustana announced that the university will offer a semester-long study abroad program in Central America with a physical location in Costa Rica.

Drs. Joyce and Margot Nelson were named recipients of the DAISY Lifetime Achievement Award — a first for Augustana.

A total of 2,022 students — including part- and full-time undergraduate and graduate students — chose to embark on a bold future at Augustana.

In only its third year at Augustana, the Journey Scholars Program has seen significant growth. A total of 46 prospective students applied, and among those students, 27 committed to the program — more than double the number of students who participated last year.

Augustana officially announced on Oct. 5, that it will be home to the Viking Men’s Hockey program — set to take the ice in the fall of 2023.

Augustana announced that it has an Anatomage Virtual Cadaver table — one of only two known tables in South Dakota and one of only a few in the region.

Augustana developed a model integrating the key dimensions of well-being, and highlighting the interdisciplinary connections to success.

Augustana and its Alumni Reflect on Band’s 125th Anniversary

A celebration of the Augustana Band’s 125th anniversary took place on Thursday, Nov. 11. The concert at the Washington Pavilion entitled “A Prairie of Voices,” featured the All City Middle School Honor Band, as well as a commissioned piece by Dr. James M. David — an internationally-recognized composer.

The 2021 NCAA Woman of the Year, Kendall Cornick

Kendall Cornick, an All-America softball player at Augustana, who majored in biology and psychology at Augustana, is the 2021 NCAA Woman of the Year. She was announced as the winner on Nov. 9, during a streamed awards show celebrating the Top 30 honorees.

Vietnam Veteran Bestowed Honorary Degree: 'It's an honor that Augustana would recognize me'

Augustana conferred on Nov. 11, an honorary Bachelor of Arts degree to Sgt. Gene Murphy. When Murphy enrolled at Augustana in 1972, he had already been a veteran for more than three years. In 1979, just 16 credits shy of meeting graduation requirements at the time.

Augustana was recognized with the 2021 Call for Code University Engagement Award — recognizing organizations that have exhibited a deep commitment to Call for Code.

Augustana students Onajite Taire ‘22 and Gedion Alemayehu ‘22 were part of a team that was named a global finalist for the 2021 Call for Code University Challenge.

Augustana nursing program within its School of Health Professions was officially endorsed as a Holistic Nursing Program by the American Holistic Nurses Credentialing Corporation (AHNCC) — the only college in South Dakota and one of only 17 schools in the nation to earn this accreditation.

When Augustana launched the School of Music in the spring of 2020, its key initiatives included establishing a new multimedia entrepreneurship major with the Avid Learning Partner (ALP) program at its core.

Four New Members Elected to Augustana University’s Board of Trustees

On Dec. 3-4, the Augustana Board of Trustees installed four new board members. Joining the Board of Trustees for 3-year terms, beginning in January 2022, are Manaal Ali ‘20, Cheryl Collins, Andrea DeGroot-Nesdahl and Damien Fair ‘98.